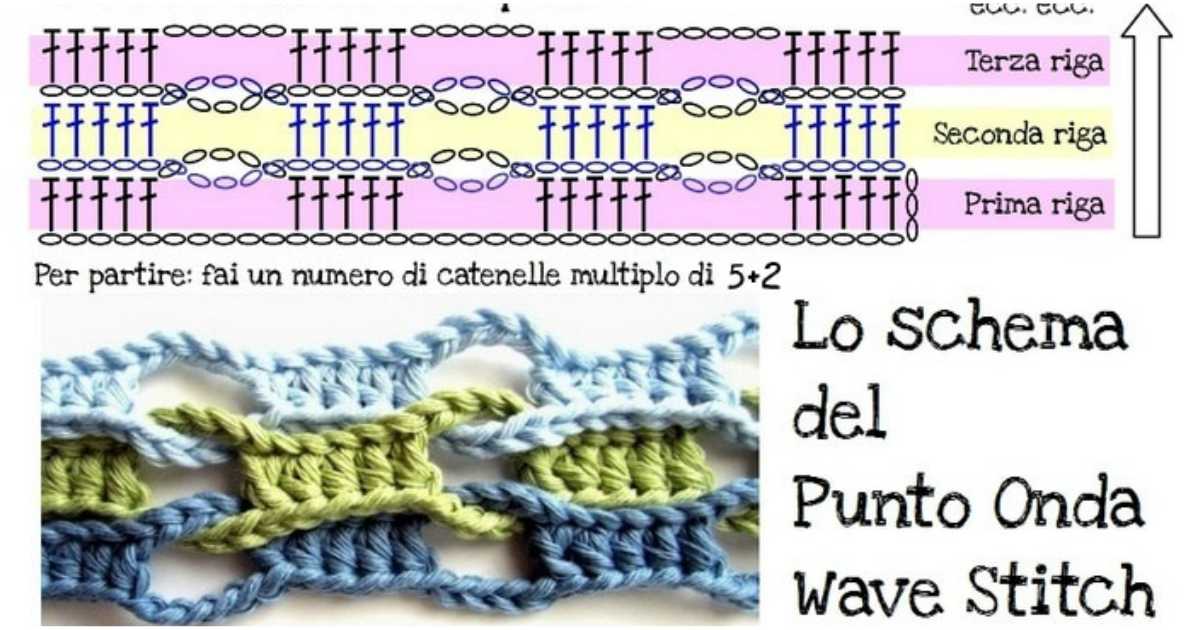 Now you enjoyed it as much as me and so, by popular demand. There are photos plain simple tutorial.

A few steps to understand and then are always the same points that are repeated endlessly. My Wave Point can be used to realize a project entirely or even to only form a pattern or an insert within a head worked with more traditional points. There is no indication for strict measures of yarn or crochet hooks, can be worked with any kind of wire and with a suitable hook. To learn how to achieve it is necessary to know only 2 basis points of the chain and the half-high mesh. I have thought with half knit high because it is a beautiful spot, compact but not too thin (it’s one of my favorite points), but in fact you can even replace low or knit a sweater altaottenendo a bit different effect. In theory it could even groped the shirt high …

You start working on a number of chains of multiple 15 + 1 if you decide to use high Mesh half, otherwise you have to change the number of the chains after the most.

After doing the first chains are worked 5 half high mesh interspersed with 5 chains (skipping 5 basis points) and continues up to finish the tour. At this point, the first wave is finished, and you have to close the point and stop the wire. With a new yarn end is begins the second wave that is totally similar to the first but which must be per hour worked only in part: they make the same number of chains of the first wave and then working the first piece of mesh 5 half high. At this point you have to intersect the two waves, the chain of the second wave has to go into the holes of the first already finished.

At this point, on the second wave, is working the 5 chains that follow the first part of 5 half high mesh, they are counted around 5 chains of the base, are skipped and the hook tip is in the sixth beginning to work the second block of 5 half high mesh. This continues up to complete the lap and the second wave, also in this case closes the point and hides the wire. For all the waves you have to do exactly the same procedure that we have just seen, they may intersect at infinity.

The pattern includes the usual two points: chain and knit high in blocks of five each. The chains that make the waves are those that intersect each wave and the next and each wave is always machined separately cutting the thread each time.

Then you know that you can also use the half-high mesh (as in the photo above), etc. etc.

And then I also made a fast paced video to complete the work, now you have no more excuses, via Onda point to make: scarves, bracelets, covers, neck warmer and anything else your imagination suggests there.